I suppose what I can do is explain why I’ve dedicated my life to mental health, what happened to make me take that path, and how I feel yoga works in doing that.

Most people go to yoga because they have injuries or want to become more flexible, or chill out… I came to yoga as a last resort, I used to roll my eyes at the idea of having time to ‘waft around on a yoga mat’… I was just 22 and had got myself to such a place of exhaustion and depression (through over working and the recent loss of my father) that I didn’t have the energy to workout how I usually would in spin, or run 10k’s etc. Counselling was only doing so much, and I realised I couldn’t drink, eat, starve or travel myself away from myself. So, at rock bottom, and with nothing more to lose, I walked to the yoga studio at the end of my road in Putney to do my first class. I wish it wasn’t a cliche, but it was, after months (or probably years) of suffering, in just 45 minutes I came out feeling like my energy had been topped up and I had found the clarity I needed to get better. I had to understand how that was possible from 1 yoga class, so I signed up to their teacher training…

They say that yoga is the journey of the self back to the self, and I believe that’s true, because our true self is already in there, we aren’t broken, it’s just buried under layers of defence patterns, and walls that we have built up to protect us, but like any walls, those defences also imprison us. It’s only when we dedicate the time and find the bravery to peel back those layers, that we can come back to who we really are, and that’s freedom.

How we do that has become my life’s work, and having explored many other avenues to check if there is a way which is better than yoga, quicker, easier… for me, nothing competes. I will try and explain why.

Physical alternatives – Exercise is amazing, but it does less than eighth of the job. Exercise moves our physical body and science shows if we shift our physical state, we shift our emotional state. So it’s temporarily helpful, and certainly starts the momentum back in the right direction, which can be a huge part of the battle, but because of our lifestyle, we take misaligned bodies to impact exercise which can often lead to injury. Or, because we haven’t dealt with the mind, the root, we now become addicted to a new distraction from self, which is just a sticking plaster, better then other distractions from self (drinking, drugs, shopping, eating, appearance, socialising, overworking etc) but nonetheless, just another distraction.

Mental alternatives – Counselling / coaching is amazing and I’m training to be a psychotherapist so I really do back this one, but, if you can include movement too and put theory into practice, it will embed in your body, not just your mind.

Religion – It’s well studied that as humans we need to feel like we have purpose, that we have connection, that we are part of something bigger, we matter. And often we turn to religion for that, or that’s in our culture, and there are many benefits to that. There are also, like anything, some very apparent costs to some aspects of it too. I guess the key difference in my mind, which I have discussed with many people, many times, usually in disagreement with me, is that religions often require worshipping something or someone external, rather than the internal, or ourself, which keeping to the subject of mental health, is key.

Chemical alternatives – Which I suppose combine the physical and the mental; I understand getting to a point where medication feels like the only way, I really do. And I know it can be a way to provide the ‘strength/energy/mindset’ required to start getting out of a place where you feel stuck, so it can be helpful. I am not a doctor, so I can’t comment on the impact of drugs, but most people are aware that there are side effects. Similar to any drugs, including alcohol, hallucinogens and the ever increasing use of Ayahuasca, it’s a temporary fix, which usually has a cost / come down which could take you to a darker place than when you started. Or, just makes you rely on it, so you can’t function without it and the effect of that truth is pretty scary, limiting, entrapping in itself, how ironic. The popularity of drugs isn’t surprising as so many people are suffering, and it offers an escape (apparently the calorie free aspect of some drugs is now also very appealing…what has the world come to?), but one of the most interesting things I read about hallucinogens, which are now being considered as a prescribed means of treating some mental illness, is their ability to dissolve the ego. For example, I read an article (I promise…) on how experiencing yourself burst into yellow post-it notes, offers a felt, lived, experience of the ego dissolving into insignificance, which in turn offers the clarity we need, to see that all the stuff we worry about is caused by holding onto an image of ourselves or ‘protecting our ego’. Once we see the futility in that, nothing really matters… we are free… which is exactly where you can get to through self study, in other words, yoga.

I digress, but it leads me onto the truth that most people don’t understand about yoga – yoga poses are just ONE EIGHTH of the practice. The rest is about our way of being, which eventually, through practice, rewires the brain for happiness.

Yoga is about finding happiness, Ananda (bliss), and it gives us a framework to get there, there are 8 limbs of yoga, just 1 of those limbs is Asana (pose, actually seat for meditation…), the others include Yama (restraints), Niyama (observances), Pranayama (breath control), Pratyhara (sense withdrawal), Dharana (concentration), Dyhana (contemplation), Samadhi (bliss), so every practice of yoga is a tool or pathway, to happiness, or in other words, improve our mental health.

I was tempted to say I won’t dissect those 8 limbs of yoga as there are many books on it and it’s not possible to fully explain in this post, but then I feel like I haven’t really offered a resolve for mental health awareness week, other than do yoga, and maybe I should stop there. But, for those of you who want to understand more about how yoga can transform us both physically and mentally you have the choice to keep reading…

I have to start with a caveat for my grossly oversimplified translations here, in my defence, this would be a never ending post if I were to examine the root of each Sanskrit syllable. By it’s nature, most Sanskrit texts were designed to be spoken or sung, and the frequency which you feel the word offers the meaning. So Sanskrit is designed to be felt and is therefore subjective and context related, hence a black and white translation isn’t possible…that’s already too lofty for most people, so I will stick with the one word closest translation I can find…

3. Asana – Yoga poses, actually it means seat as these were different seats to sit in for meditation which offered different health benefits, but later we made them into a typically western ‘efficient’ sequence to target all areas of the body (prioritising the physical benefits over the mind…where it all goes wrong).

4. Pranayama – Breath control, there are so many different forms of breath techniques used to raise and lower energy in the body.

5. Pratyahara –  Sense withdrawal, when we make a conscious effort to turn our attention inwards.

6. Dharana  – Concentration, having withdrawn your senses now you can deal with the distractions of the mind itself.

7. Dhyana – State of being keenly aware without focus (slightly different to Dharana, which is focussed on one thing).

8. Samadhi – Bliss, oneness reached through the practice of the above limbs, realising that we are all connected.

So… you see why it’s almost not worth explaining the eight limbs, because each one needs to be studied, debated, applied to your current situation and most importantly PRACTICED, to understand. Yoga is incredibly ironic in the way that it’s never about achieving the thing we are trying to do, it’s about what we learn about ourselves on the way. So, when we practice a yoga pose, it’s never about achieving the yoga pose, as there’s another one right around the corner, it’s what we learn about ourselves through trying… how do we react to a challenge, how often do we doubt ourselves, why do we find it hard to slow down… Etc, the super healthy, realigned body is just an amazing bi-product, which is why you never feel like you’re ‘ having to go for a work-out…’.

And it’s the same for all the other limbs (which should be valued equally), it’s not about ‘achieving’ kindness or truth, but it’s what we learn about ourselves by practicing them. We wouldn’t do well to just do ‘non-harm’, a too literal example would be just going around being lovely to everyone, without any truth or authenticity. Similarly, we couldn’t just do ‘truthfulness’ or we could appear like Ricky Gervais in The Invention of Lying… we have to practice all of these ways of being, in balance. I was only told this weekend by the wonderful Ian Davis from Orange yoga, that it is ‘the friction of practicing two aspects that creates or sparks a worthy product’, e.g. the result of practicing non-harm and truth together. And it is through practice, of Asana, Yama, Niyama and all the other limbs, that we grow and transcend the limitations of the mind, society, judgement, and come to realise absolute truth and so experience true freedom.

The beauty of yoga is that you could just go to a short yoga class to improve flexibility or chill out, and a good yoga teacher will subtly weave in the 8 limbs, so that you work-in as well as work-out. You may not realise during the class, but you will feel the benefits and start to peel back some of those layers which could be holding you back from your true potential.

You may read all of that, and think, you know what, sounds like a lot of hard work, I think I’d rather just have a beer, or buy my new shoes. I’m sure that’s how people listening to my corporate presentation last week felt after they signed out, which is cool, if that works for you! If you ever reach a point where that’s not hitting the spot, then at least you have read about an alternative. I’m sorry that I have not provided a magic pill to mental health, but to be honest I wouldn’t want to do that, because so much of our growth comes through the trying, often the struggle. Most of my greatest learnings or realisations have been when I’ve been the least ‘happy’, so for me, it’s not about finding temporary happiness, it’s about using every incredible, powerful emotion that we experience as humans to learn about ourselves so deeply and to grow so wonderfully, that we find peace within, no matter where you are or what is going on around you. And for me, that is a constant, beautiful sometimes painful but always worthwhile practice, and that is yoga.

1 thought on “Mental Health And Yoga” 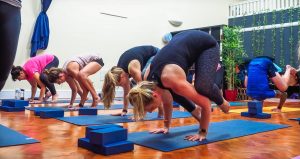 Book your class now and get back on the mat! 😀
Read our studio reopening COVID-19 measures
PLEASE COMPLETE OUR HEALTH DECLARATION FORM
BEFORE COMING TO THE STUDIO